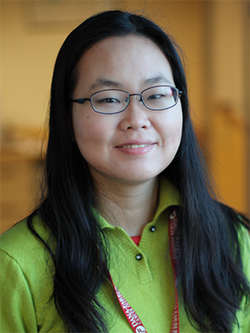 Our recent screening efforts have sought to expand upon the existing protein-protein interactome map for budding yeast, Saccharomyces cerevisiae.  My research examines de novo gene birth and focuses on interactions involving yeast proto-genes.  These are transitory, protein-coding sequences that lie in non-genic regions of the genome, but have been shown to be transcribed and translated.  Whether the resulting peptides participate in protein-protein interactions has not been determined.  We are performing the first systematic screen to identify binary protein-protein interactions involving proto-genes.  Proto-genes are not specific to yeast.  In fact, they have been identified in a number of organisms, from bacteria, Drosophila, and C. elegans to monkeys and humans.  Moreover, these peptides have been proposed to be drivers of environmental adaptation and speciation, and may also play a role in human disease states, such as cancer. By utilizing a simple model organism, such as yeast, we will be able to determine the biological significance of these interactions in vivo and extrapolate how eukaryotic cells might utilize de novo gene birth to add to the repertoire of macromolecular interactions.